Society for Sustainable Mitigation And Related Technologies Against Catastrophic Events 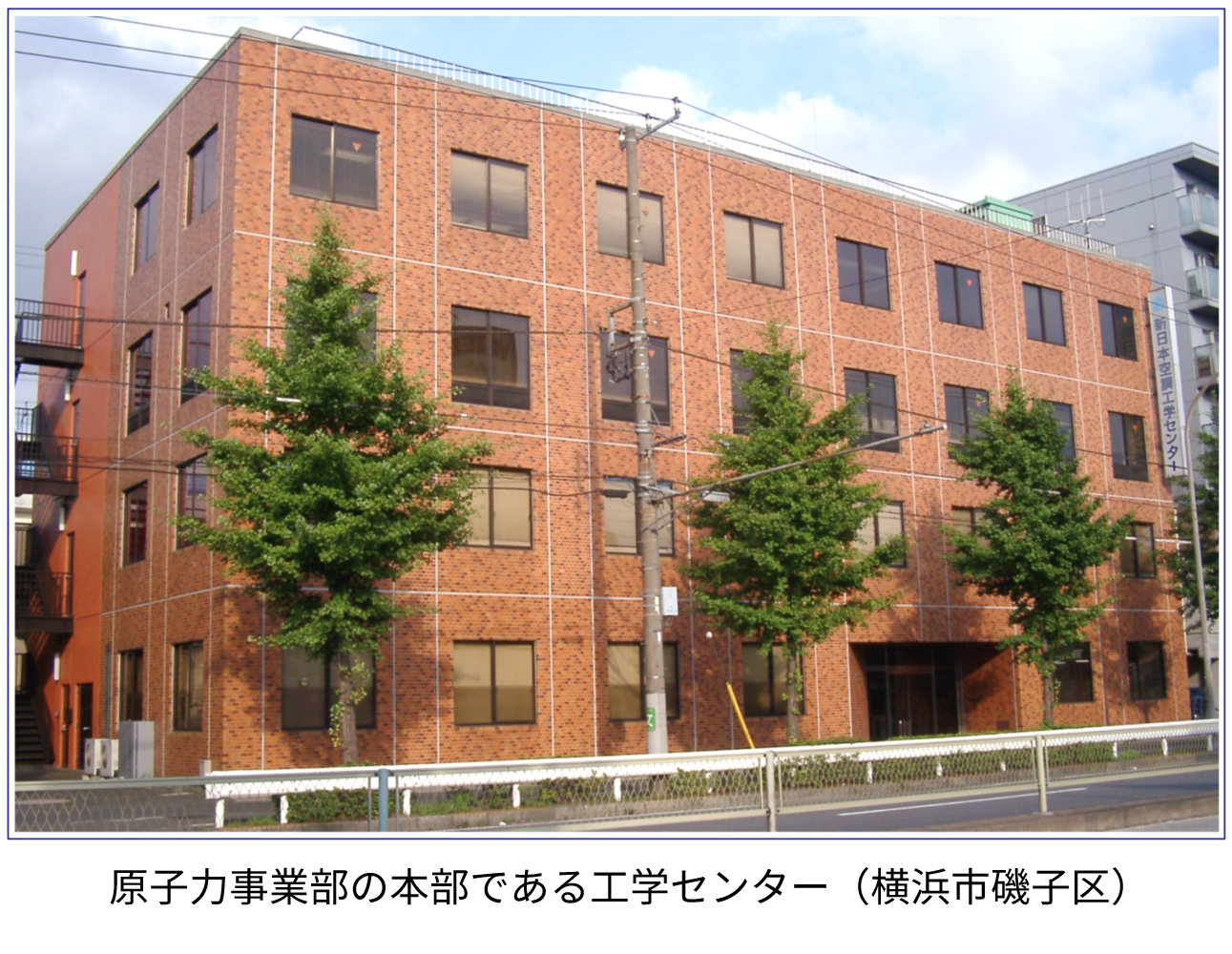 The following is a list of some of the original products developed in response to the unique requirements of nuclear facilities.

We have developed a damper that stops water from entering the facility through the air-conditioning ducts in the event of flooding caused by tsunamis, floods, guerrilla rains, etc. (Patent No. 5522869).

Important rooms such as machine rooms and storage rooms in various buildings and plants are often located underground in consideration of the weight of the equipment and the effects of earthquakes, and in these facilities, air conditioning intake and exhaust vents may be located near the ground.

In the event of a disaster, such as a tsunami, flood, or guerrilla rain, which has been increasing in recent years, water can enter the building through the air conditioning ducts through these intake and exhaust vents, causing equipment to stop functioning and social infrastructure to shut down.

Jabba Shut was developed to prevent such water intrusion. When it detects water intrusion through the air-conditioning ducts, the water stopper drops under its own weight and closes the ducts to protect important indoor facilities from water intrusion.

Since the system does not require any source of operation such as electricity or air, it can be operated reliably even in an emergency. 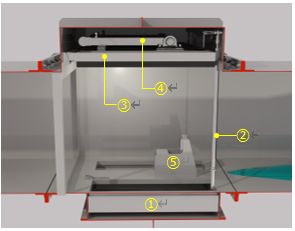 When water flows into the lower flooding detection tank, the detection tank will lower and the connecting rod will be pulled down.

2. When the connecting rod is lowered, the latch is released and the watertight plate falls under its own weight.

3. The lock arm collapses in reaction to the watertight plate falling.

4. The lock arm is stuck in the receiving stand and pushes the water stop plate to ensure the water is stopped.

Conventional fireproof dampers are required by the Building Standards Law to be fireproof for one hour, but we have developed a three-hour fireproof damper with even higher fireproof performance for important facilities such as nuclear power plants (Patent No. 5712277).

This damper is based on a part of the U.S. product safety standard (UL-555), and its components and structure have been improved so that the gap between each part is within the specified value before and after the test when the temperature rises to 1110°C in 3 hours according to the heating curve specified in ISO 834.

Appearance of the damper 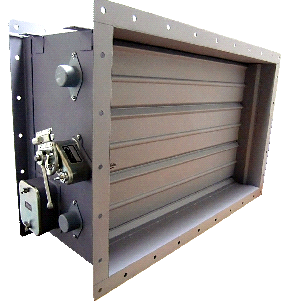 At the Fukushima Daiichi Nuclear Power Plant of Tokyo Electric Power Company (TEPCO) Holdings, Inc., viral infections and odor control caused by sweat and sebum through the full face masks used by thousands of workers every day have been a problem, so the effectiveness of using electrolyzed water as cleaning water was verified.

All of the equipment for refining electrolyzed water was integrated into a container to minimize on-site work. 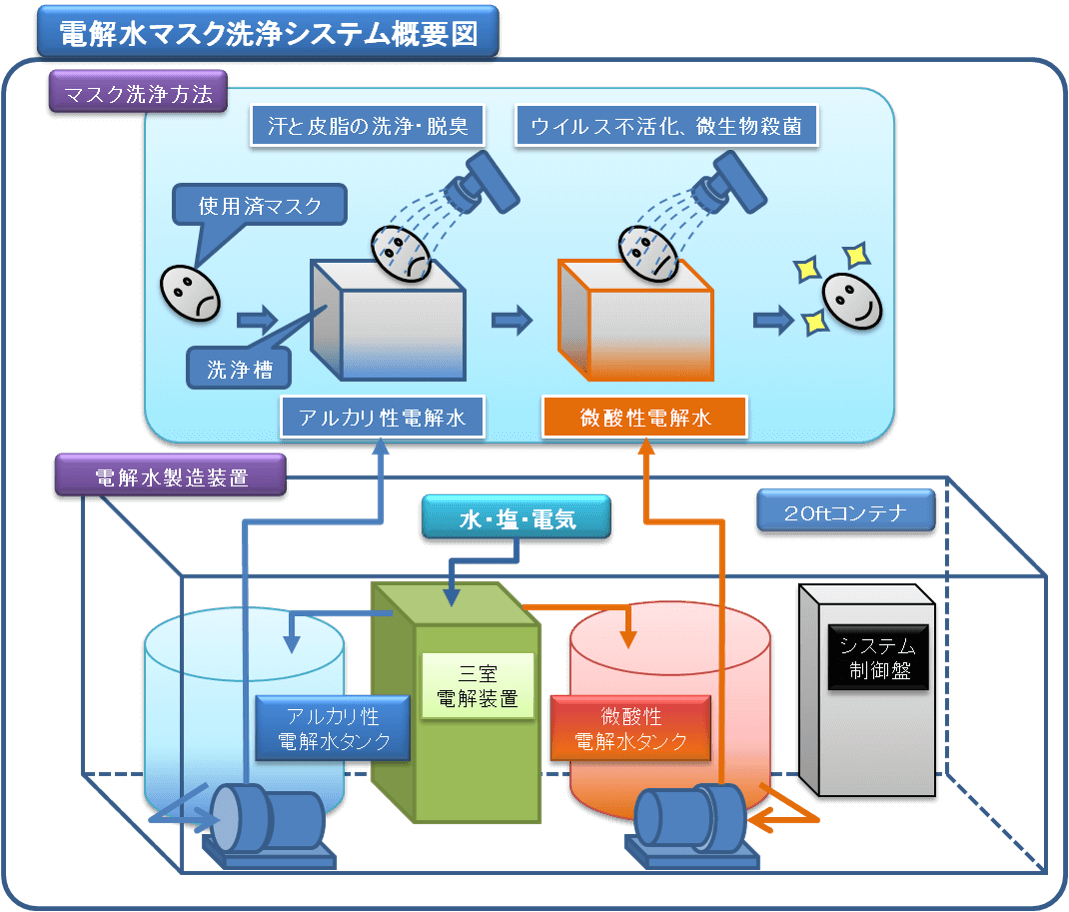 Spot air conditioners are used as simple cooling equipment at construction sites and event venues in the summer, but they have problems such as a narrow cooling range and the need to collect the water (condensate) generated, so we developed a condensate-free integrated cooling unit (Patent No. 4709426).

The shower cooler does not require any plumbing work and can be operated immediately after installation as long as there is a power source. Since the condensate generated by the cooling coil is evaporated and released into the air along with the exhaust air, there is no need to collect condensate as in the case of conventional spot air conditioners.

The semi-cylindrical shape of the body allows a single unit to blow cool air over a 180-degree area, and two units installed back-to-back can form a cylindrical shape to cover the entire 360-degree circumference.

In addition, waste heat is blown out from the top of the unit to prevent the temperature of the surrounding area from rising. 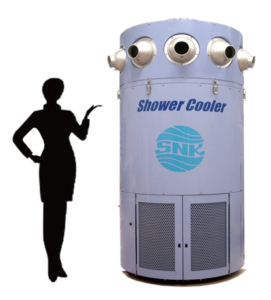 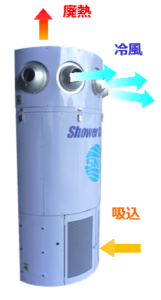 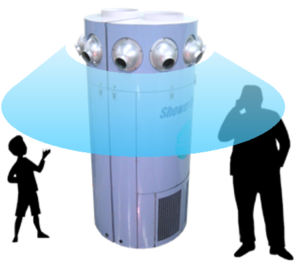 In order to prevent accidents such as being pinched when opening and closing doors in facilities where there is a difference in air pressure between inside and outside, we have developed a door that cancels out the pressure difference by combining two doors that open inward and outward to enable safe opening and closing operations (Patent No. 4070025).

If there is a pressure difference between the space in front and behind that is partitioned by the door, it can cause the door to open or close suddenly when opening or closing, which can also lead to accidents such as the door hitting the body or pinching the fingers.

The inspection door with a pinch prevention mechanism has a structure in which the outward-opening main door and the inward-opening secondary door are connected by link gears to cancel out the pressure difference, allowing safe operation without requiring extra force when opening and closing, and without requiring any auxiliary power such as a motor or compressed air.

We have developed an ultra-high performance vertical louver (rain capture) based on a new concept that captures rain by utilizing the difference in inertia between air and raindrops (Patent No. 3779235).

The Rain Capture is an ultra-high-performance vertical louver that allows air to pass through smoothly, but collects raindrops that enter without fail. The smooth curve of the blades and the collection protrusions in the middle of the blades allow air to pass through, but collects rainwater without fail. The unique drainage structure prevents water from splashing out from the bottom of the louvers, which has been a problem with conventional vertical louvers, and ensures that water does not puddle and is discharged out of the louvers.

In addition, the louvers can be replaced during renovation work without worrying about the capacity of the existing blower, because they generate less noise such as wind noise, maintain high collection efficiency even at high wind speeds, and have lower pressure loss than conventional products.

cross-section of a feather

We have developed a consolidated air purification system (A.C.TRAIN) in which the filter, fan, and operation panel are mounted on a special cart, and the weight is reduced by dividing the cart into sections for easy transportation and mobility (Patent No. 5910959).

The combination of the filter and fan sections can be freely selected, and the system can be used for all kinds of applications, including the purification of contaminated areas, whether in an emergency or temporary installation. For the filter section, a high-performance HEPA filter or an activated carbon filter can be selected or used in combination according to the contamination situation.

The fan section is available in single-phase 100V and three-phase 200V power supply specifications, and a quiet type is also available for living rooms. The operation panel is a stand-alone unit, allowing for remote operation. 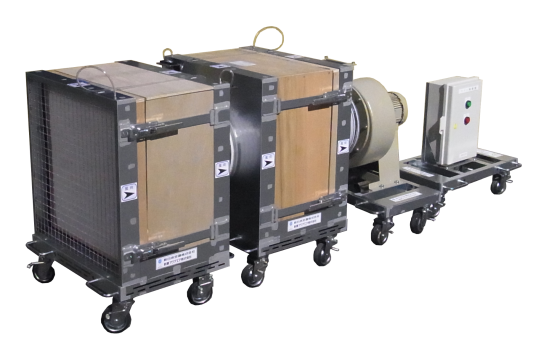 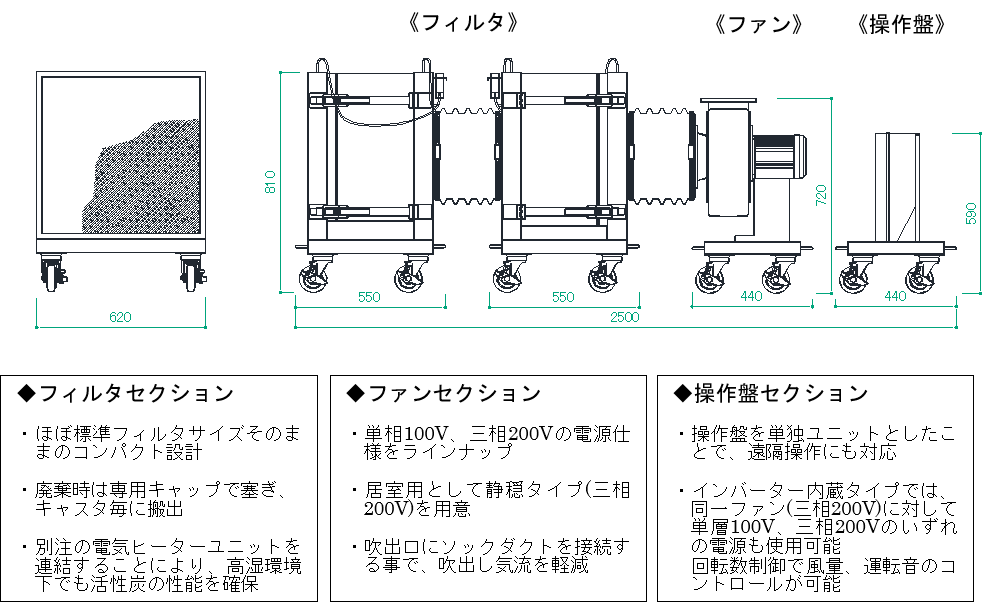 We have developed a portable antibacterial filter unit and a freestanding infection prevention hood, both of which are connected to ducts, for the purpose of preventing droplet infection of the new coronavirus, by applying the contaminant containment technology of the Nuclear Energy Division.

The antibacterial HEPA filter is a glass fiber filter material chemically immobilized with a bactericidal enzyme, which is effective in inactivating viruses and sterilizing bacteria. The “freestanding infection prevention hood” consists of a hood that covers the patient’s head and is responsible for exhausting air, a mounting base, and a movable stand.

The freestanding infection prevention hood is connected to the portable antibacterial filter unit by a duct and exhausted through the hood to reduce the risk of infection to doctors and nurses by droplets from patients.

Furthermore, the contaminated air from the hood containing droplets is reliably filtered by the portable antimicrobial filter unit that incorporates an antimicrobial HEPA filter, and the filtered air is exhausted outside the room to keep the room with the patient under negative pressure and prevent air leakage to the surrounding rooms.

The portable antibacterial filter unit can be used alone as an air purifier or exhaust air treatment device. 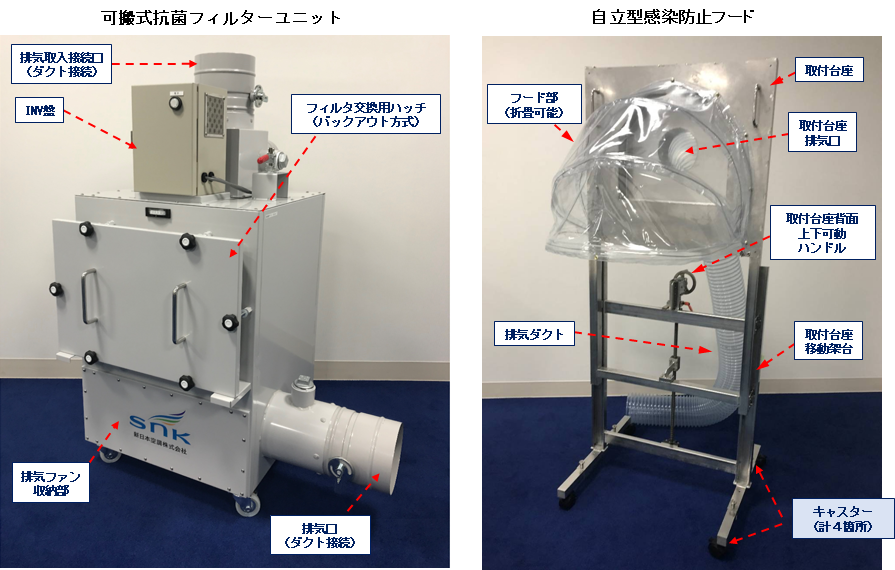